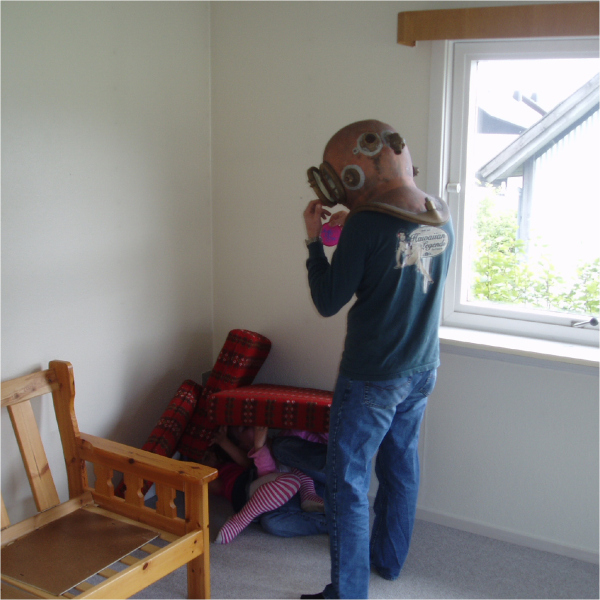 “Mummy, don’t let him take it off! Or I’m never coming out from under here!”

“Silly! Daddy’s not going to hurt you!”

“But you said he was, he was, inf- infenctious!”

“Infectious, darling. Do you know what that even means?”

“That’ll teach you to listen to other people’s conversations, big ears! Daddy has chickenpox. It’s horrid and itchy and if you catch it and scratch it it’ll leave scars. The diving helmet is just our little joke.”

Gosh, this was a tough one, but isn’t that half the fun? Thank you to Rochelle for hosting Friday Fictioneers this week once more, and for the challenge of writing a 100 word story in response to the photo prompt.

Do head on over to her blog, enjoy all the reading, and why not take part? Click on the blue froggy to read the entries! 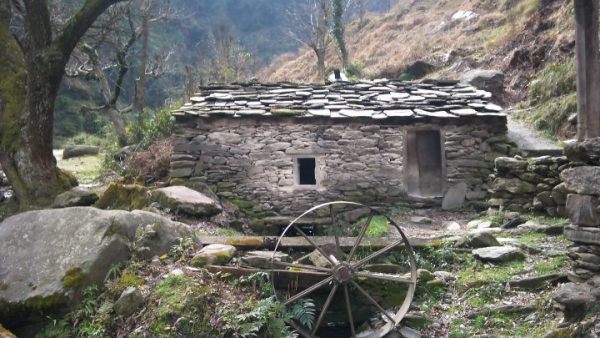 “Your grandfather was a gajo, he made the place as much like a vardo for your grandmother as possible, but without having to move. He was a homebody.”

I stared at Mother, at the curious little stone house, the wheel seeming to prop it up on a hidden axle.

“She was his mollisher. She chose to marry out!”

I heard the sneer in her voice, the sprinkle of Romani for her, not me.

I looked up at the mountain tops, the splendid isolation. Such freedom, yet such a prison. Nowhere to go for granny.

Better late than never for this week’s Friday Fictioneers – thank you Rochelle for the weekly inspiration!

I thought this little old house looked a bit like a caravan, with a wheel stuck in the ground, hence I went down the Romani route this week.

Please do head on over to this week’s prompt and see what other writers have created! 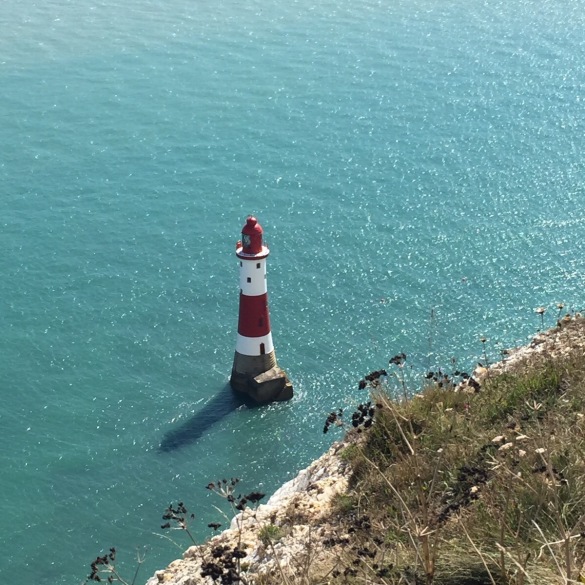 I could not let them take him, my brother. he was too weak, too young, too necessary to keep Mother company. I could be spared, I could adapt. Dickon could not. He was Mother’s favourite, she and I were too different. Not a day would pass when we did not bicker, when I tended the crops one way, and she would undo all my handiwork. I could not stitch or spin or weave to her satisfaction. Dickon – he knew how to manage her, he could do all the things that I failed at so miserably.

I dressed as a boy, looked like a man, and the men of the impressment took me.

I am here now, aboard HMS Magnanime, about to go into battle with the French, yet again. I am slight, I am nimble, I can ascend to the very top of the highest mast and not succumb to the pull of the sea. I am the youngest, the best, so says the captain.

I am homesick. I am seasick. But I am glad.

Her’s this week’s entry into the lovely Linda’s Stream of Consciousness Saturday prompt, where she has asked us to use the word ‘press’, either on its own or as part of a word beginning or ending with press as our inspiration.

The British Royal Navy was in the habit of using pressgangs to forcibly recruit people into service. For non-officers, there was no real concept of choosing a life at sea in service as a career, so the pressgangs (formally the Impress Service) would scour the country to select suitable men. Contrary to popular legend, they did not have the power to recruit anyone other than seafarers. But why let the truth get in the way of a good story!

Please do take part in Linda’s weekly prompt – you never know what will come into your mind! Please also pop along to read other entries – they will be many and varied! 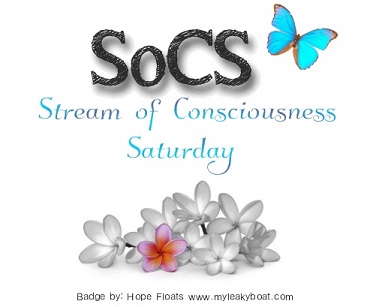 Can Callie trust herself, after all that she has been through? Are her instincts off? Is she still all that she used to be? Welcome to the world of Anti-Virus. #antivirusthenovel #authorsofinstagram
That’s how far I am into my final edit of Anti-Virus! Then it’s off to the lovely Becky at @platformhousepublishing so that she can work her formatting magic!
Sector 13 is the worst. Nobody wants to live here, but some people have no choice. It’s too close to the Red Zone. Red means danger - and disease. Welcome to the world of Anti-Virus #antivirusthenovel #authorsofinstagram
I took a couple of days away from Bookstagram as I was feeling burned out and overwhelmed with life in general. I culled a few mailing lists that I was on to give me a quieter inbox too. I feel better for it!
Oppressive heat. A relentless summer. Deserted streets. CCTV, watching, waiting. Welcome to the world of Anti-Virus
I am my socks.