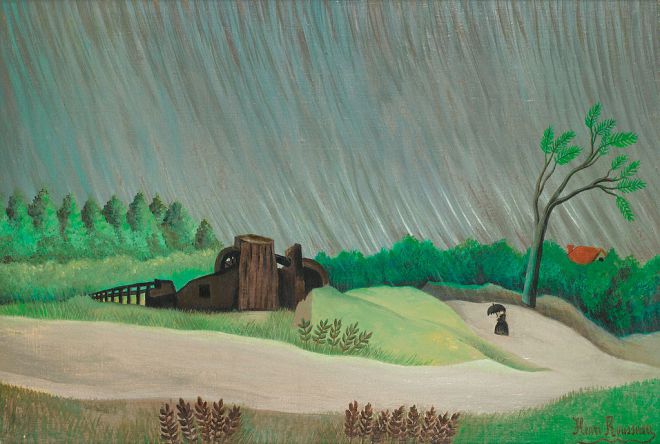 Here is where my father lived – and died.

Here is where I learned to walk, to talk, to do as I was told, without question, without demur, without a thought for my own safety.

This is where my nursery rhymes were the constant thrum and clatter of gears, spindles, wheels and metal grinding on metal. This is where wool was not something to cuddle up to or keep me warm at night, but to wipe from my streaming eyes, the gossamer fibres burying themselves between my eyelashes as I dodged the never-halting carders and pulleys. Here, I learned that loose-flowing curls were a death-sentence, not a young girl’s crowning glory.

All is quiet now. The scene is pastoral, industry has long gone.

It’s time for Jane Dougherty’s Microfiction Challenge where this week she asks us to respond to this pastoral scene painted by Henri Rousseau. I had in mind the now peaceful, countryside scene that greets visitors to the fascinating Ironbridge Gorge Museums, once a hub of the Victorian industrial revolution. It must have felt and sounded like bedlam at the height of its productivity.

Thank you @tara.a.lake for your ⭐️⭐️⭐️⭐️⭐️ review of Anti-Virus, I really appreciate it!
Thank you @lilyrookeauthor for reading Anti-Virus and for posting this review on Amazon and Goodreads!
I sincerely hope not…!
And… I’m back! Let the dystopian delights continue!
“Is that a pen with a light in it?” I hear you ask.
What better thing to do at this festive time of year than read a dystopian novel?!