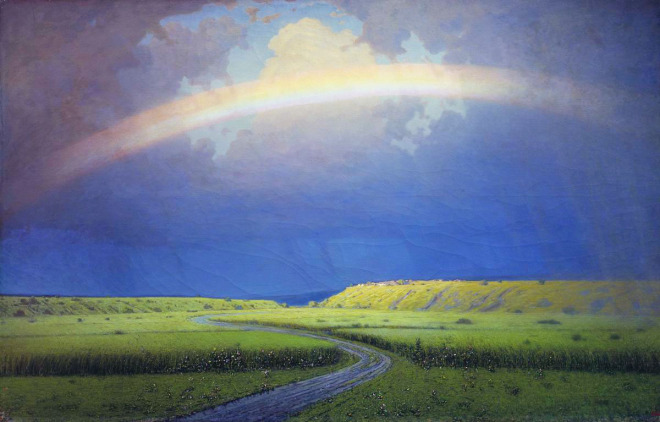 Sky painted with an ethereal hand, if only he would care to notice. But, as always, he was too full of himself, of visualising his increasing bank balance, of mentally spending it on new furniture, an extension, a pool, a double garage.

Sky sighed. She had been trying for years, chasing him around the globe, waiting for just the right moment after the sun-infused shower to wave her paintbrush in a great arc and illuminate the heavens with her multi-faceted glory. But she always failed. He was obtuse and oblivious..

Anger roiled from the depths of her being, a white heat rose from the soles of her delicately shod feet and coursed through her veins, clothing the forbidding clouds in a brief but intense flash. She opened her mouth and a great growl spewed forth, years of pent-up frustration shaking the trees, the rivers, the houses below with its violence.

He stopped in his tracks as fat tears of sorrow lashed his face, flattened his hair to his scalp, stuck his shirt to his skin. Lightning and thunder filled his void and then, then he looked up as a great bolt split the sky and tore his house asunder. All became still, as if the world was holding its breath.

“Janice? Janice? it’s me, Mike. Oh my God, the storm! It’s all gone, our beautiful home, our car, everything destroyed!” Mike winced in anticipation, waiting for the wrath of his wife to assault his ears.

“It’s just bricks and mortar. You are my home, that’s all that matters.” Her voice was gentle, soft, warm. He had failed to noticed these little things for such a long time.

It was then that he saw the rainbow. Finally. Sky rested her paintbrush and allowed a few final tears to fall to the earth. Her work was done.

Thanks to the lovely Michael, who I have known via the internets ( :)) for some time now, I have found this Microfiction Challenge from Jane Dougherty, who this week invites to write on rainbows. Please do head on over to Jane’s blog to enjoy the writerly goodness – and why not take part too?